Acting Up to Get Attention 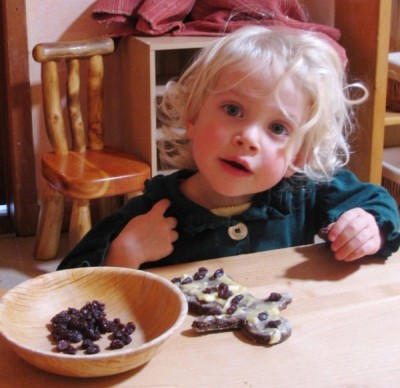 My younger son is 19-months, and has recently become very curious about sticking food up his nose or deep into his ears. I’m concerned about this. The first few times he did it, my husband and I reacted with a sharp, “No!” Now I think he is continuing to do this for the attention, but it’s not like I can ignore it because if he gets something lodged up there we could have to take him to the E.R. It’s very frustrating! I don’t want to resort to spoon-feeding him purees again, but I cannot give him cheerios and raisins as a snack while I prep dinner. What to do?

Dear Mama,
When kids do things to “get attention,” our instinct is to ignore them–we don’t want to reinforce bad behavior, right? However, I have a bit of a different view. I can’t remember where I heard it or read it, but I distinctly remember hearing this statement, which really rang true to me: “If you child were acting up because he was hungry, or tired, you wouldn’t deny him what he needed, would you? You wouldn’t say, ‘Oh no, mister, you’re not getting any lunch till you shape up!’ No. We realize that a child is not able to act his best when his needs aren’t being met. We feed him, and THEN we address the behavior. Why would it be different for attention? Isn’t the need for attention just as real as the need for food and sleep?” (If any of you know the source of that quote, please let me know so that I can attribute credit.)

But how can we respond to the child’s need for attention without reinforcing the behavior that we don’t want to see? The way I strive to do it is to respond to the need while letting the child know how he could ask for attention in a way that’s more acceptable. When children are acting up to get our attention, they are often quite happy to ask for that attention in a different way, as long as they can actually GET the attention in that new way as successfully as the old way got it.

Show Him A Preferable Way to Get Your Attention
How might this look? If I had a 19-month-old who was putting raisins into his ears or nose, here’s what I might try: When I saw him doing it, or that he was about to do it, and I might say, “Silly boy! Raisins go in your mouth. You know that! Let me see that raisin go in your mouth.” If/when he puts it in his mouth, I’d give him some good positive vibes: “Yes! That’s it! You almost forgot, but now you remember! Yum yum yum. How does that yummy raisin taste?” I’d give him a little hug or ruffle on the head.

But that’s not the end. At that point I’d be sure to honor his request for more attention by telling a little story, or singing a little song to him, giving him a taste of what I’m cooking, talking about the flavor, texture, etc. I might even create a little game: “Does the raisin go in your…eye? No! It goes in your mouth! Does the raisin go in your…hair? No! It goes in your mouth!” This may seem like it’s going the wrong way, but in fact it’s broadening the gesture to show him that he can get my attention by doing other silly (yet less dangerous) things with the raisins. If he goes to stick it in his nose or ear again while we’re playing that game, I’d say, “Uh-uh. Just for pretend, remember?” Then I’d show him how to *pretend* to put it in his nose or ear, and I’d respond in the same silly way that I had with the hair or eye.

Does this make sense? I’m transforming that attention-getting gambit into a game that is not actually dangerous, and showing him an acceptable way to initate attention, or get a game from me. Perhaps the most important part of this is that the NEXT time, if he pretends to put a raisin in his eye or in his hair, I must notice right away, and jump into that fun game. I must show him that this new way of getting my attention is just as effective at getting my attention as actually putting raisins in his nose. Soon he’ll be able to initiate interactions with me in ways that we both can enjoy.

What If It Doesn’t Work?
If attention is really what your child is going for, then the scenario above is likely to work. But things are not always so clear-cut. Perhaps he kind of wants your attention, but perhaps he’s also really enjoying the sensation of the raisin in his nose. In that case, he’s not likely to be re-directed so easily. So what happens if I do the “Silly boy! Raisins go in your mouth. You know that! Let’s see that raisin go in your mouth,” and instead of putting one triumphantly in his mouth, he ignores me?

Well, when kids are doing things that are unacceptable and I want them to stop, I try to be clear about my behavior expectations, and then do something that’s MORE enjoyable than the thing I’ve asked them to stop. I want doing what I say to be enjoyable, to become automatic. So I do my best to make doing what I say, NOT feel like a punishment. Of course, some days I do better than others. But it’s my goal.

So I might say, “Those raisins are just for eating; it looks like you’re all done eating raisins. When you’re ready to eat them, you can try again. What will you do instead?” Then I’d take the raisins away from him and bring out that story or song, or play a silly game with him. In a short while I’d likely give him another chance with the raisins: “Are you ready to eat them now?” If he nods, “OK, we can try again. Here you go.” But I’d keep interacting with him, keep being more fun than raisins in the nose. If it’s too attractive to him and he can’t help himself, then I’d take the raisins away and let him know that he can try again with them tomorrow. Then I’d help him move through his disappointment (see my post When They Can’t Have What They Want).

Is all of that a lot of work? Well, yes. But in my opinion, it’s worth putting in that work now, to establish that Habit of Yes. The goal is that eventually you’ll be able to say, “Those raisins are for eating; what can you find to do instead?” and he’ll be able to look around and find something that’s acceptable and enjoyable to you both, more and more easily. It’s completely possible and feasible! It just takes practice.

So, that’s it. When a child is acting up as a way of getting attention from me, I give him that attention and let him know how he can get that attention in a way that’s enjoyable to me instead of annoying. When kids are really misbehaving in order to get attention, they are usually fairly happy to change their behavior if they can successfully get attention in another way. When a child is doing something I don’t like because it’s enjoyable, then I let him know what’s expected and then work to transition him to a new activity that’s MORE enjoyable than the one I’ve asked him to stop. My goal is for him to eventually be able to come up with another fun activity on his own, but I know that it will take time and practice before that can happen.

Hope this helps! Let me know how it goes.