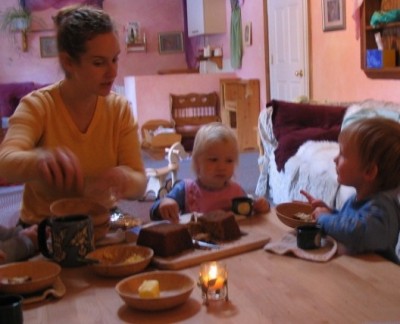 I am working on slowing down and letting my almost-3yo daughter be involved in my tasks, but I’m struggling. Not just because I have trouble slowing down, but also because my daughter has trouble with it too! She often wants to do the next step, but we hadn’t even finished the step we were on, and so i start trying to work faster and faster to stay ahead of her. She clearly wants to help and be involved, but she wants to do everything at warp speed it seems. How do i slow it down, bring in that spaciousness to myself, to help her??? Like let’s say i’m just starting to pour the milk into a measuring cup, it’s not even filled up and she’s telling me she wants to pour it in, or we are just mixing the batter, and she wants to pour it into the tins (which i’m not letting her do yet, i feel it will be too messy)….. does that give a picture?? she’s just a normal, impulsive, smart toddler i know…

Dear Mama,
Good for you for working on involving your child! First off, don’t be worried that this takes effort and practice–f it all came easily and naturally, we’d all be doing it already, wouldn’t we?

In terms of feeling rushed with trying to stay one step ahead of your child, I have experience with that, too: my first year of working with toddlers, I was the assistant and we had nine 1- and 2-year-olds. They all brought a packed lunch, and every mom packed multiple tiny tupperwares filled with different types of food. Unpacking nine tiny lunches literally took almost half an hour, at 2-3 minutes apiece. The kids would see me unpacking yummy food and they would want it NOW! I kept telling them that it was almost ready, and would try to go as fast as I could.  But it seemed like no matter how fast I went, it was never fast enough and it always ended with somebody having a meltdown.

Finally, I realized that there was no possible way for me to do it fast enough.  What could I do instead?  Try and do it out of their site?  But I couldn’t be gone for so long…what I did instead was to slow WAY down.  This was so counter-intuitive that it took me three months to come up with and try.  If being fast wasn’t fast enough, how could being slow be better?  But it worked like magic.  Instead of trying to go faster, I started acting like I had all the time in the world.  One of the ways I did this was by talking about what I was doing and what I was seeing and what I was smelling, all in a spacious and non-rushed way. “I wonder what will be in THIS little container? Oh, look, it’s kiwi! I love kiwi, don’t you?” One child reaches out and makes noises like they want it. Instead of telling them that it’s almost ready, I’d say, “Do YOU like kiwi? I like kiwi, too! Did you know that when I was as little as you were, I had never seen a kiwi?” then I might tell a little story about kiwi, or let them smell it, or move on to the next little tupperware.  Once I started doing this, unpacking the lunches took even longer, but guess what?  No meltdowns!  I had a few kids who really enjoyed staying with me and being involved in the process, while others eventually lost interest and wandered off to play.  We ate lunch when everything was ready, and didn’t feel rushed anymore.

Now back to your situation.  How can you help your daughter slow down to your speed, instead of trying to stay one step ahead of her?  One way to do this is to first say when she CAN do what she’s asking, and then to talk about what you’re doing to keep her in the present with you.  So if you’re measuring the milk and she wants to pour it in already, you could say, “Yes. When I am all done filling this up, you can be the one to pour it in. Up it goes! Higher…higher…higher…there it is! NOW it’s ready for you to pour!” If you tell her when she CAN do it, and then describe what’s happening between now and then, it can help both you and her to be calm and do things in a more measured way (ha-ha).

If she’s asking to do something that you’re not going to let her do, like pouring into the muffin cups, you can tell her what she CAN do instead.  You might say, “Nope, that’s a job for me to do. But what you CAN do is put a muffin wrapper into each cup when I’m ready to pour.” If she’s disappointed with this, you might empathize and tell her a story about something that your mom told you that you had to wait till you were older to do, and then how great it was when you were finally big enough to do it.

Give it a try, and see if this helps you to slow down. The fact that she’s LOOKING ahead doesn’t mean that you need to BE there. You can absolutely say yes, and then talk about all the things that need to happen between now and then.