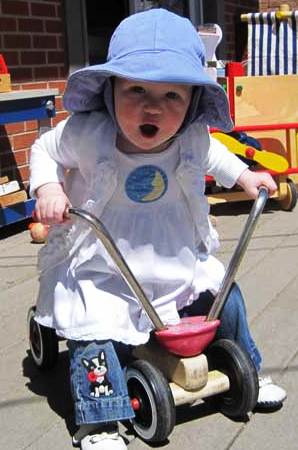 Many parents and caregivers whose children actively dislike diaper-changing try to do it as fast as they can, and get it over with as quickly as possible. But in my experience, this merely accentuates all of the things kids dislike about getting their diaper changed, making it even more intensely unpleasant. On the other hand, you can spend all day trying to talk a child over to the changing table if he doesn’t want to go, drawing out the unpleasantness indefinitely. What to do?

My views and practices on diaper changing were altered terrifically by my LifeWays training. Up until that time, I had just viewed diaper changing as a slightly unpleasant task that has to be done multiple times per day. But LifeWays suggests making times of bodily care into special times to bond with the child, and diapering is a very intimate piece of bodily care. Using this lens can completely transform your diapering experience, whether your child hates diapering or merely tolerates it. From the child’s point of view, this changes the diapering experience from one of being torn away from play, manhandled, then put down again as quickly as possible, to a special time of connection with their adult. My second year of teaching, I was so inspired by these ideas and I made diaper changing such a special time that none of the children had any interest in potty training! But that’s a post for another day.

Going to the Changing Table
Breaking kids away from their play can be difficult, especially if your child already has a negative association with diaper changing. Having a routine, can help: for instance, always change their diaper right after they’re done eating but before their play starts again. Also, folding diapering into another transition can help, especially if the transition is to something that they enjoy, like going to play outside. You finish your play and tidy up, then say, “We’re getting ready to go outside. First we’ll get a fresh, dry diaper, then get on our shoes, jackets and hats, and then we’ll be ready to play in the snow!” As we’re going to the changing table, I’ll talk about what we’ll see outside, “Do you think Squirrel Pipkin will be running around in the Cottonwood tree when we get outside? I wonder if he’s eaten all of the corn off of the cob we put out for him.”

If a child is playing and I can tell she’s soiled her diaper, I know I’ll have to pull her away from her play for a diaper change. Most of the time, I’ll let her know what’s coming. “It smells like you have a poopy diaper. I’ll finish wiping the table, and then I’ll take you to get a new diaper.” I only give advance notice like this when it seems like it helps; for some children, anticipation only prolongs (and heightens) the unhappiness. When my table-wiping is done, I’ll often give a choice: “Would you like to walk, or hop like a bunny?” Often, hopping like a bunny to the changing table is a fun enough activity to take a child’s mind off where she’s going; as she hops I’ll sing, “Here comes Sarah Cottontail/Hopping down the bunny trail/Hippety hoppety, hippety hoppety, Sarah’s on her way.” If I suspect that she won’t walk or hop, I’ll structure my offer so that one option involves me carrying her over: “Would you like to walk, or fly like an airplane?” Then I’ll fly her here and there until she’s laughing, and eventually land on the changing table.

Sometimes, though, I know that no option will be attractive, and nothing will distract her; we’ve been through this many times before. In that case, I’ll simply ask, “Would you like to walk, or shall I carry you?” At this point, a child will sometimes ignore me, hoping that the situation will disappear. However, I know that she has a soiled diaper, and my job as the caring adult is to clean her up. I also know that no amount of reasoning or cajoling is likely to work now. You can’t change emotion through logic, and she DOESN’T WANT to. I acknowledge this: “You wish you could keep playing. I get that. But it’s time to get a new diaper. Will you choose, or shall I choose for you?” If she still refuses to make a choice, I’ll say, “OK, I’ll choose this time,” and I pick her up. Often at that point she’ll suddenly say, “I walk. I walk.” But I tell her compassionately, “I’m sorry, it’s too late to choose now. You can choose to walk next time.” This may sound draconian to some parents, but my experience is that this rarely happens more than twice if you’re consistent; after that children know to choose when the choice is offered, and things go much more smoothly all around. The key is to do it with compassion; you don’t have to be mean in order to be firm.

On the Changing Table
Whew! You made it to the changing table! The hardest part is done!

How can this be? you might ask. You’ve had lots of trouble on the changing table, and you’re girding your loins for battle. However, my experience is that the transition of leaving play is the hardest part, and once you’re on the changing table, you can shape the experience into one where you’re connecting with each other. And the counter-intuitive trick that will change your diapering experience is this: if your child hates having his diaper changed, slow it waaaaayyyy down. Instead of making this about changing the dirty diaper as quickly as possible, make it about having eye-to-eye face-time with your child. Make it a time of you loving on him and connecting with him. Make the fact that the diaper gets changed, into the least noticeable part of the experience.

Here’s how I do it: when a child is laying down on the changing table, I look down at him and smile into his eyes. Sometimes I’ll stroke his hair and down both sides of his face while I do it. Then I’ll grin a little and lift the bottom of his shirt, and play a belly-button game: “All around the haystack goes the little mouse,” I’ll say, circling his belly-button with my finger. Then I’ll start to ‘walk’ my fingers up his tummy. “One step, two step, into his little house!” And that mouse will run up into his armpit. I’ll do this two or three or even four times in row, until he’s relaxed and smiley. Sometimes I’ll alternate the rhyme with this one: “All around the playground goes the teddy bear. One step, two step, tickly under there!”

Next, I’ll take off his pants. If he starts to get anxious because he knows the diaper-changing is about to start, I’ll pause again, and do a little game with his feet: clapping his feet together sole to sole, I’ll chant, “Shoe a little horse! Shoe a little mare! But little Justin’s feet go bare, bare bare!” Then I’ll kiss the bottom of one foot while looking up at his face, then the bottom of the other. I’ll alternate feet, kissing and kissing again until he’s relaxed once more. Then I’ll pull out one or two wipes and get the new diaper open and ready, talking about the mobile that’s hanging above his head, or the mama-baby picture at the foot of the table. I’ll open the soiled diaper very slowly, pull it away and put it in the diaper pail with one hand, holding my other warmly against his tummy. Once I had a little boy in my care who hated diapering, and I was changing his diaper while his mom watched, so she could get some new ideas. I opened his diaper and he began to writhe and buck. So I put my face down into his neck and started giving him lots of loud kisses, making them much more attention-grabbing than the diaper coming off. “I see,” the mother said thoughtfully, “You just kiss him into submission!” I had to laugh.

Now comes the part that many children dislike: being wiped with cold wet wipes. I once had a wipe-warmer that was like a low-grade hotplate that went under the container of wipes, but it would dry the pack out, so I got rid of it. Instead, I’ll hold the wipe up and say in a silly voice, “It might be chilly.” Then I’ll put the wipe against his bottom and hold it in one place for a moment until it warms up. “Brrrr! Oh, now it’s not so bad.” Then I’ll start wiping, but sooooo ssllloooowwwlllyyy. While this is happening, I’m looking at his face, not at his bottom. Depending on the child, at this point I might simply look silently into his eyes, or I might tell a little story, a longer nursery rhyme (I like the on that starts “There was an old woman thrown up in a basket/seventeen times as high as the moon”), or, if being wiped is a very intense experience for this little boy, I’ll make sound effects as I slowly wipe: “Zzzzzzzooop! Zzzzzooop!” Then I might change the speed a little, changing the speed of my sounds as I do: “Zoop-zoop-zoop!” for three little dabs, then a longer stroke again, “Zzzzzzzzoooop.” We are both watching each other and concentrating on the sounds and the feeling of the wipe. I smile at him. “That’s a strange feeling, huh? You’re doing a great job.” I give him a kiss on the forehead. We put on his new diaper, and I open the tabs and let him help place them. Then I’ll play the belly-button game again. Yes, again! Or I blow a raspberry on his tummy (“Let’s eat an apple” -munch on his foot- “Let’s eat a plum” -munch the other foot- “Let’s blow a raspberry on your tum!”). The trick is that I’m playing games he loves, both before AND after the part that he hates. Finally, I stand him up and have him give me a big hug as I pull up his pants. Then I hug him back, and nuzzle his neck, and swing him down from the changing table. “Come on, let’s go wash our hands,” I’ll say.

Key Points–The main thing is, get them to the changing table fairly quickly, and then take it slow and make it into a time where you’re connecting with each other. The diaper will get changed, but that’s not what he will remember from it.

If you’re stuck in a rut of neither of you liking it, don’t be discouraged if it doesn’t go from hard to fun the first time. I had one little girl, about 11 months, old who would scream and kick! We put a special little bunny toy on the windowsill above her changing table, that only came down during diaper changes. As we would head over, I’d whisper, “Do you think the bunny will come down today?” Gradually she started screaming later and later in the process, and finally, after about two months, she stopped altogether. Now diaper changes are one of the things that we enjoy about our days together. I’d love to hear about your experiences: good, bad, or challenging!

Leave a Reply to Gentille B. Cancel reply