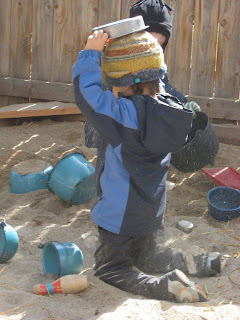 Dear Miss Faith,
I’ve been feeling a little worried about my three-year-old son because I observed him in a gymnastics class recently and while all the girls were following instructions perfectly, he was getting very distracted and off-task. This was right after his preschool teacher told me that he dawdles a lot more than the other kids. So I’m just looking for some perspective on whether he is a normal 3 year old boy or whether he is a little more distracted than others and if so, what help does he need now to intervene early. It’s been on my mind. He has some mild sensory-integration issues but I don’t know if that’s related or not.
Thanks, J.A.

Dear J.A.,
I definitely suggest that you trust your instincts on this. If you’re feeling uncomfortable enough to write this, it certainly wouldn’t hurt anything to have him evaluated. If the experts watch him and say he’s normal, you can really breathe easy. And if they say he’s borderline and give you some suggestions on ways to support him, that will be helpful too. Early targeted intervention can really help kids to round out their development so that potential problems are nipped in the bud.
On the other hand, dawdling and getting distracted are VERY normal activities for a three-year-old. Even if he’s dreamier than other kids his age, that doesn’t necessarily mean there’s anything wrong with him. Some kids are just dreamier than others. However, since you mention that he has some sensory integration issues as well, it wouldn’t hurt to have an expert weigh in on the issue. In the meantime, there are some things you can do.

Help Him Do It Himself

In terms of dawdling, here are some techniques I use all the time: Ask him to do something once: “Please take your shoes off.” If he doesn’t do it, look over and say, “Oh, do you need some help getting your shoes off?” Sometimes that’s enough to get them moving. If not, go over and say, “Let’s do it together. First, open the velcro.” If he doesn’t reach down to open the velcro, take his hand and wrap his fingers around the velcro. Give him a chance to pull, then wrap your hand around his and get his fingers to pull. So you’re really helping HIM to do it, you’re not doing it for him. Likewise, if it’s time to get ready to go, you ask him to go get his coat once, then say, “Oh, do you need help getting your coat?” Then you take him by the hand and go over together. When you’re standing right in front of it, say, “Where is your coat?” If he doesn’t get it, take his hand and put it up to get the coat. It’s energy-intensive, but if you do it for a few weeks, he might start to wake up to doing things a bit.

Another idea is to start playing rule-following games, like Simon Says. As he gets better at it, start issuing two-part commands: “Simon says, go stand by a lamp and put your hands on your head.” And then even more complex: “Simon says, find a cushion and put it on the coffee table, then sit on the couch.” If you son is capable of doing things but is easily distracted, these rule-following games can be very helpful to get him into the habit of doing what you ask him to, and promptly! Make it fun and engaging, so that following your instructions has positive feelings associated with it. Another rule-following game is “Red-Light Green-Light,” where kids run when you say “Green Light!” but have to stop immediately when you say “Red Light!” (for three-year-olds, you might want to run and stop with them until they really get the hang of it). A third game is “Mother May I,” but that might be too advanced for little ones.
A very simple rule-following game I play at the table if we’re waiting for kids to finish washing hands or waiting for the meal goes like this: Sing, “Ten little fingers, they all belong to me/They can do so many things, would you like to see?” Then I make up things for the kids to do. “Who can put their hands on their head? Who can wiggle their ears? Who can touch the tip of their nose? Oh, Sylvia can! Julie can! Look, everybody can! Who can cover their mouth? Who can stroke their hair?” etc. etc. If you want to make it even more direct practice for rule-following, you might phrase it like this: “Please put your hands on your head. Thank you! Please wiggle your ears. Thank you!” These ‘requests’ are likely to get giggles from your kids, so you can enjoy yourselves while kids are learning to do what you ask.
Warmly,
Faith