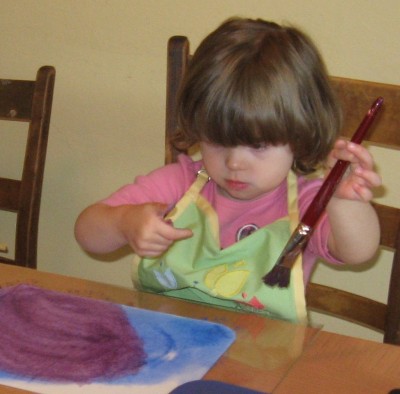 My little girl is not quite 2 and a half years old and seems to have the grouchiness and rudeness of a moody teenager! The behavior that distresses me the most is her tone and the “mean” way in which she talks to people, especially me. I have tried rephrasing her unpleasant voice with a more pleasant voice (using prior advice from your blog), and she will repeat the request using the more pleasant tone and add a “please” on the end of it, after I explain that she forgot and remind her. But she continues to talk to me and respond to EVERYTHING I say in a mean, rude tone of voice, and I am exhausted from trying to consistently model the “right” way to talk to one another. Even if I say something nice to her, a typical response is, “NO! The dinosaur is NOT big and strong!!” or “Stop singing Mom! Stop talking!”, complete with a scowl. I am a full-time mom, trust me–no one talks to her this way. I have tried giving her space, giving her lots of attention, giving her choices, taking away certain choices, ignoring the unwanted behavior, praising her kindness, NONE of it seems to make ANY difference. Thanks so much for your time.

Dear Mama,
I have a couple of thoughts for you. It’s interesting that you compared your daughter to a moody teenager; I’ve often heard toddler-hood referred to as “the adolescence of early childhood,” and I think the description is apt. Both times they are going through huge existential changes where they realize that they are not as close to you as they thought–they are really their own person. In both times they are flooded with hormones and huge emotions that they don’t know what to do with, and don’t know how to control. In both times they will ‘try on’ different personality traits and see how they feel and how people react to them.

I think the best thing we can do for children who are really struggling, both during adolescence and toddler-hood is to have an absolute insistence on Right Behavior. To let them know that it’s absolutely fine to feel however they feel, but that they must still be kind and respectful, no matter what. Of course, we must do it from a place of love and a place of compassion–when I say ‘absolute insistence on right behavior,’ this doesn’t mean that they will be able to do it when they are tired, hungry, overwhelmed, etc. You give her the words to say, and the tone, and wait for her to say it. If she doesn’t, pause for a moment, then cup your hand to your ear, then repeat it. If she really can’t repeat it after you, look to see why. If she’s tired, hungry, etc., say, “Oh, you poor thing. It seems like you need a hug right now. You’ll be able to speak in a kind voice when you’re feeling better,” and give her a hug and really pour some love into her.
If she won’t do it because she’s testing you, you’ll have to decide how to insist. I think that it’s absolutely fine to let her know that when she’s rude, it makes you not want to help her or play with her. You might say, “I only want to get juice for someone who asks me kindly. When you’re able to ask in a sweet voice, I’ll get some for you,” and go about your business. Don’t do it out of anger, do it from a place of compassion. If she then asks nicely, respond as if it is really coming just from her (as it is) and act as though it’s the first interaction you’ve had on the subject. If she responds with more demands or more whines, consider that she might be too hungry etc. to do it right now.
Finally, if you can’t figure out why she won’t do it (or even when she’s just tired), you might say, “I’ll say it for you this time,” and say it as you wish. Or sometimes, “I can tell that you’re thinking it. You’ll be able to say it again next time.”

So, it’s easy to talk about doing all of this from a place of compassion, but what to do when you feel yourself getting mad, and are just fed-up with having to correct her every time. In those situations, you might “play” being mad. This can let her know that her actions are really affecting you, without the feelings of overwhelm that can arise if you get really angry. If she yells at you during play, get a pouty look on your face and say, “I don’t want to play with someone who yells at me.” See if she can change her behavior on her own. If she’s trying, but struggling to find the words, give her a prompt, then respond as if she had come up with it on her own. If she doesn’t seem to care, then you might withdraw from the play for a little bit. Remember, though, that you’re just playing at being mad. Be willing to come back in as soon as she changes her tune. Don’t direct a lot of anger at her, but absolutely let her know that it makes you mad/hurts your feelings/makes you not want to play, and follow through with that impulse if needed. If this happens too many times in a row, you may stop playing and do something else altogether, and let her know, “Maybe next time you’ll be able to play more kindly. I’m done with playing, for now.” Being rude and unkind has repercussions, and better for her to learn that now, with someone who’s willing to practice that with her, than to learn it to her dismay in the outside world. And if she’s worse with you than with anyone else, this may carry over into all of her intimate relationships as she grows up if you don’t nip it in the bud.

Just for a Week

Does all of this make sense and seem feasible? It may feel like what you’re doing now, but if the behavior is persisting, then you’re not being consistent enough in insisting on right behavior. My suggestion is to do a big ‘campaign’ for the next week, where you really put a lot of effort into this. Knowing that it’s only for a week can stop you from despairing that it’s for the rest of your life. Of course it will need to go on longer than a week, but really put that big up-front effort in now, for a week.
But most of all I want to say, try your best not to take it personally! She’s not a bad person, she’s just learning her way in the world, and you will be doing her a big favor by letting her know what’s not acceptable. If you need to, use imagery and pretend for yourself! Pretend like she’s a little girl who has come from a war-torn country and you’re helping her adjust to normal society again. Pretend that you’re a fairy godmother come down to help this child become cheerful and pleasant for her family. Figure out an image that works for you, and use it for the next week to draw on consistency and patience that you never knew you had, and let her know through your kind, firm actions that a new era has entered into your household.
Warmly,
Faith
I LOVE your comments! Please comment below.
Do you need some new ideas for your own situations? Email them to me at faith@joyfultoddlers.com. I can’t promise to be quick, but I will do my best to reply.