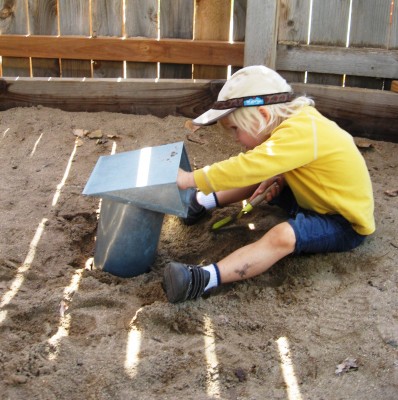 My 2yo son is a joy when he’s happy, but he gets frustrated really easily and shrieks out of frustration.  It is ear piercing!  I find myself jumping to do whatever it is he wants, all the time, just to avoid that shriek.  I’d like to teach him more patience, but I have no idea how to go about it.  Help!

Dear Mama,
I’m right there with you on how frustrating it is to have a child who shrieks when he’s frustrated.  Our instinct is to “fix” everything for him as quickly as possible, even though we can tell that this is just perpetuating the behavior.  But what to do?  Ignore him?  Tell him to “Use your words”?  Neither of those seems to work all that well.

I had a little boy I worked with who had this very same problem.   I wanted to empower this little boy to realize that he could solve his own problems (either on his own or working together with someone else) rather than having an adult always swooping in and magically solving the problem.  My other desire was to teach this little boy the skill –yes, it’s a skill– of asking others for help in ways that make them glad to help, rather than in ways that annoy them.  So here’s what I did:

That little boy would start trying to do something; in this case, let’s say he is trying to move a chair over to the sink.  He tugs on it and he shrieks.  I look up from my seat and say, “It looks like you’re having some trouble!  If you want some help you can say, ‘Help, please.'” And then I wait.  If he keeps pulling without saying the words, and I can see he’s getting more and more frustrated, I’ll simply give him encouragement:  “Wow, you’re working REALLY HARD!  You can do it!”  Sometimes that type of verbal support is all the help a child really needs.  But if he keeps going and I can see he’s about to lose it again, I’ll remind him:  “If you want my help, you can just ask for it: ‘Help, please.'”  As soon as he says the words, I happily jump up to comply.  I restrain myself from simply moving the chair over to the sink myself, and instead I give the minimum amount of help necessary for him to continue his task.  At the beginning, he might not realize that he has to continue working at it once I come onto the scene.  “No, YOU do it,” I tell him, “I’ll just help you.”  He pulls on the chair and I give it a little boost to help it get over the hard spot.  “There we go!  We’re doing it together.”  Then I let go and let him continue on his own, giving him encouragement if he needs it.

This little boy and I worked around and around on this issue.  He would shriek, look over at me, and shriek again.  I’d encourage him, and remind him of how he could get me to help if he wanted it, by saying, “Help, please.”  If he didn’t say it, I would stay in my seat.  Sometimes he would get more and more frustrated to the point where he would begin to cry.  At that point I would give him compassion and offer hugs.  Other times he would imitate me as soon as I said it:  “Hep, peese,” and I would happily help him.  It took several weeks, but once he got the hang of it, I noticed that not only did his shrieking diminish significantly, but his frustration levels dropped significantly as well.  He didn’t have to get to the end of his rope in order for me to get up and help him, he just had to ask.  Also, I think he began to realize that he was capable of a lot more than he thought before, because I didn’t just do the things for him; I helped HIM to do them.

After that little boy, I used this method with many other children and it mostly worked really well.  The main problem that I had was that sometimes it would work TOO well, and a child would ask me “Help, please” all the time, before even trying on their own.  In those cases I might ‘help with my voice,’ giving them my attention and encouragement while I watched them work to do it on their own.

Good luck with your little guy!  With our own children especially, it can be really challenging to watch them be frustrated and not jump up to help, but work on your own patience in order to let him work on his.