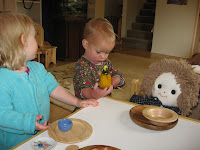 From the time they learn to talk, the word “Mine!” often plays a prominent role until a child is three or so. In fact, the first year I started working with toddlers, a sheet of paper was passed around titled “Toddler Property Laws.” It starts out:
-If I like it, it’s mine.
-If it’s in my hand, it’s mine.
-If I can take it away from you, it’s mine.
-If I had it a little while ago, it’s mine.
It goes on from there, but you get the idea. Everyone who has spent time with toddlers laughs when they read it. As I’ve spent more and more time with toddlers, however, my views on the word mine have changed. I’ve come to believe that most of the time that a toddler (especially a young toddler) says “mine,” what he’s really doing is expressing recognition of this object, explaining that he has a relationship with it. What do I mean by this? Well, here’s a conversation that I have on a regular basis at Rainbow Bridge. Let’s choose a little girl named Jojo. Jojo sees Sylvia playing with a toy that she recognizes:

Jojo: Mine!
Me: Were you playing with that before?
Jojo: (nod)
Me: Yes. (pause) You were playing with it, and now it’s Sylvia’s turn. (pause again) Now you’re playing with the dolly.
Jojo looks down at the doll in her hands, then up at me, and nods.

At least half the time, this is the conversation in its entirety. I acknowledge Jojo’s relationship with the toy, then point out what she’s playing with now. This feels satisfying to her, and she goes off to play with her doll. Unfortunately, many times we adults misunderstand toddlers’ limited vocabulary, and assign the meaning that WE would give to the word “mine” when we hear them say it. When a child sees a toy in another child’s hands and says “Mine!”, the adult often refutes them, going on to say who it really belongs to, who’s allowed to play with it when, etc. And often, this ends up with an unhappy child. My idea is that to them, this feels like we’re denying their relationship with that toy, which is completely unjust. They keep trying to explain (by saying “mine!”), and the adult keeps telling them that no, it’s not actually theirs. How frustrating.

On the other hand, sometimes when they say “Mine!” it’s because they see another child playing with a toy and they wish they could play with it. (I have a theory that toys ‘come alive’ to children when they are being played with, which is why toddlers always want a toy that somebody else is playing with.) When that happens, we go through the conversation above, but instead of wandering off, Jojo responds with a firm, “Mine!” Here’s what I do then:

At this point a child usually is happy to find something else while they wait, although sometimes she may need my help to find something that is as “alive” as the toy in Sylvia’s hands. I make another toy come alive by starting to play with it, then offering it to her.

There are a couple of things that can trip up this conversation. One is if Jojo fails to get Sylvia’s attention before she asks, speaks too quietly for Sylvia to hear, or asks me instead of asking Sylvia. If this happens, I’ll either encourage Jojo to get her attention first, or I’ll help: “Sylvia, Jojo has a question for you.” If Jojo is too young or too shy to ask for herself, I’ll position myself right next to her and ask for her: “Sylvia, can Jojo have a turn when you’re done?” Another problem can arise if Jojo asks and then Sylvia says “No.” If this happens, I’ll simply explain to Sylvia, “Oh, she doesn’t mean right now. She means when you’re ALL DONE.” Usually Sylvia is happy to agree with this.

If Sylvia is playing at Jojo’s house, there is another layer to the word “mine.” Then the question of ownership may really be coming into the discussion. In that case, I would reassure Jojo: “Yes. That toy is YOURS. Sylvia’s having a turn with it right now. (pause). What are YOU playing with?”

Certainly it’s clear that the word “mine” can mean different things at different times and in different situations. I don’t know if toddlers really use it to express a relationship to the object, but I do know that when I think of it that way, and I acknowledge it as such, children often seem satisfied with no further action needed. Give it a try!