My Toddler Runs Away!

My son will be 2 next month and occasionally runs away from me.  I have a 6 month old also, so I’m usually holding the baby and I am so afraid this will become a habit.  When I call after him he does not stop or he’ll stop, grin, then run away again.  I know he doesn’t understand that it isn’t a game and I’m afraid chasing him reinforces the fun-factor for him but when we are outside it’s a major safety risk.  He has never done it in a parking lot (mostly because I have a tight grip on his hand) but we are going to the beach this summer and I won’t be able to hold his hand the whole time. How can I keep him safe without reinforcing the game of chase? 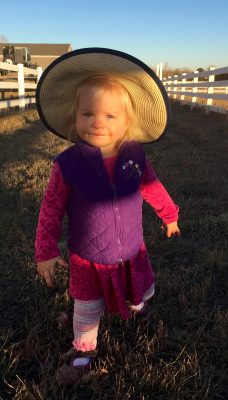 Life with a toddler is so much more challenging when you have a baby as well, since toddlers need so much physical “help” in following our directions when we ask them to do things.  I’ll focus on developing a strategy that you can take to the beach with you this summer, since that’s what you’re most worried about.  In addition, you can find some more suggestions in another post I’ve written on children Running Away, HERE.

Say YES to the Urge, While Shaping their Behavior

When kids that age giggle and run away, it is almost always because they are wanting to play.  Obviously, we can’t have them running away whenever they want.  Getting stern with a sharp “No!” is appropriate sometimes, when safety is at issue.  But at other times, it’s more effective to respond to their desire to connect, but reframe it so that they can ask for fun in a way that you both can enjoy.  Not sure what I mean?

Create A “Running to Mommy” Game

One game that I developed with my daughter could work really well for you guys this summer.  For this game, I developed a special whistle that is just for her (mine is two tones, “C” then “A”).  I would do the whistle and then kneel or bend down and hold out my arms to her.  When she’d run to me, I’d wrap her up in a big hug, sometimes scooping her up or even spinning her around.  As she was running to me, I’d smile with delight and make really good eye contact.  My joy in her arrival was contagious; she LOVED running to me when I made her special whistle.

Once she got the idea of this game, I’d make it more challenging, by “hiding” in another room and doing the whistle, for example.  Whenever she’d come running I’d spread my arms out wide and welcome her in. Once she was really good at always coming when I did the whistle, I started doing it in the yard, then when we were out and about.  As she became verbal, I encouraged her to call out, “Coming, Mommy!” as she ran toward me.

What If She Didn’t Come?

If I made the whistle and my daughter didn’t come, I’d do the whistle again, then start repeating it, gradually making it faster and faster as I’d come toward her.  Once I had her full attention I’d start backing up, still facing her with my arms outstretched.  If I was laughing and turning this into a game, she’d almost always respond by laughing and running toward me, and we could continue the game as usual.  Even though it might start with me approaching her, it would always turn into her running toward me while I made the whistle, and ending with a big hug.  VERY occasionally, I might have to go and scoop her up where she was, usually giving her kisses and raspberries in her neck and tummy.

If we were out in public or it was more of a safety issue and she didn’t come, I would absolutely drop the fun and remind her that she MUST come when I whistle.  However, once we’d get home to less distracting surroundings, I’d put down my other responsibilities and play the game again and again, making it VERY connecting so that she’d always drop what she’s doing and come running when I’d do her special whistle.

This “game” took some work to establish with my daughter, but it has been one of the most useful games that I ever made up, and well worth the effort that I had to put in at the beginning.  She is now four and a half, and I use her special whistle when it’s time to go, or if she’s wandering too far away, or if I can’t see her and want to know where she is…I do the whistle and she calls, “Coming, Mommy!” and comes running up eagerly.  Now I don’t always have to spread my arms wide, or get down on her level, but we do usually share a special smile when she comes running up.

A Habit of Yes

You have several weeks before you’ll be going to the beach with your baby and toddler; start this game now, doing it when your hands are free until it’s very well established, then starting to do it occasionally while you have baby in your arms.  Remember, the work for this is front-loaded, meaning that you put in the hard work first, then reap the rewards for a long time to come.  Of course it will take some “maintenance,” because it only works if your son feels real connection when he comes running.  If you start getting lazy and forgetting to really connect when he comes running, he’ll start responding less consistently and you’ll need to practice again with fewer distractions and higher levels of connection.

Remember, you’re working to establish a “Habit of Yes,” where it feels completely inevitable that your child will do exactly what you’re asking.  You are teaching him (through fun and connection) to put his own desires on hold to be responsive to your requests.  This requires relatively high levels of self-regulation, an important skill that your son is just starting to learn at this age.  Far from turning him into a “yes” man when he’s older, this self-regulation sets the foundation for him to grow up to do the right thing, instead of just doing what his friends are doing when he’s a teenager, or later.  In the meantime, enjoy the beach this summer!

Want to learn more about helping your child develop self-regulation and be in a relationship that’s mutually responsive?  Read my book, Joyful Toddlers & Preschoolers:  Create A Life that You and Your Child Both Love.  Read the reviews on Amazon here, then come back and buy it from my website, here.