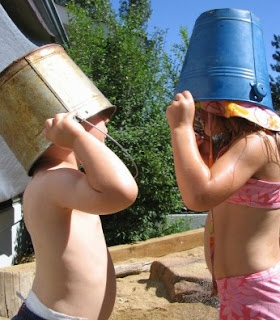 I was wondering if you could write more on hitting. Our pre-verbal 15-month-old is going through a rough phase this past month. He hits me and my husband in the face, throws things at us and the dog, pulls the cats by their tails and bops the goats on the nose. He’s just being too rough with everyone. We’ve tried reminding him and showing him how to use “gentle hands,” and lately we’ve been yelling, “Not, we don’t hit!” but that doesn’t help either. My husband is getting really frustrated as this behavior continues and increases, and he wants me to start smacking him on the hand but that just seems antithetical to my parenting philosophies. Just seems hard for us to communicate the ideas to him…maybe it seems harder because he doesn’t talk himself yet.

Hi Mama,
In my experience, there are often two ‘rough phases’ with pre-verbal kids.The first often comes shortly after becoming steady on their feet; the other one often happens right before a child is about to start speaking.
ROUGHNESS AFTER LEARNING TO WALK
So, your little guy learns to walk.At first, this is a great accomplishment on its own, and it takes all of his concentration.But then, he has mastered it!At this point, many kids go through a ‘rough’ phase.In my mind, I think of it as them realizing that they are big and powerful in the world!They are exulting in their new-found strength, and in the new-found freedom to use their arms for grabbing or flailing instead of for crawling.At this stage, I often see kids hitting, or grabbing hair, poking eyes, or biting for the first time.They are experiencing this new freedom from the inside, and they have no idea that these fabulous new movements are actually hurting other people, or the cat, or whatever else they come into contact with.This idea that they have to observe how their actions are affecting other people, and moderate them, is totally foreign. Up until this point in their lives, their actions have never had this effect on people before.So, we have to teach them to moderate their actions.
Because this is brand-new, it certainly won’t happen overnight. That’s where we, as parents and caregivers, have to pull on our inner reserves. Just be as patient as you can, and remember that this is a new skill and a new idea, and will take many, many times of practicing before it becomes an internal process for him.Yelling as a general strategy doesn’t seem to help to speed up the process, although if a child really hurts you (through a hard bite, or a head-butt in the larynx, for example), then a big reaction is warrented.But that should be saved for infrequent safety-related moments.In general, remember that children learn through repetition, and through imitation.Don’t just say “gentle hands,” as that has little meaning.Instead, say “gentle hands,” and help him stroke the kitty, or stroke your leg, or stroke the neighbor girl’s arm. “Yes, that’s it! You’re touching with gentle hands!”If you re-direct his actions into stroking with his ‘gentle hands’ EVERY SINGLE TIME he is too rough, here’s what may well happen:First, you do it about a hundred times. After a couple of weeks, you’ll be able to say “gentle hands,” and some of the time he’ll start stroking on his own, without you physically helping him to do it.You give him lots of love when he does that.About 4 weeks in, he might start going over to the cat, or to the neighbor girl, and he’ll look directly at you, and very deliberately stroke her, without any prompting from you.You go crazy with joy, because this is the beginning of a new era!You still have to remind him (and help him) to touch gently a lot of the time, but he knows how to do it, and even thinks about doing it on his own.He is proud of his accomplishment, and you are too.
ROUGHNESS BEFORE LEARNING TO SPEAK
The second time I’ve noticed that it’s fairly common for pre-verbal children to become aggressive is right before they start to speak.It seems to me that there is a process where a child becomes very frustrated that others can’t understand him, and then there’s a kind of break-through, and when they start speaking, things tend to even out.When this phase is going on, it can be very useful to give the child the words he will soon be using (you hope!).So, you see the neighbor girl accidentally bump into your little boy, and your boy turns around and hits her.Instead of saying, “No hitting!” or, “We don’t hit,” (or even “gentle hands,”) try saying what he wishes he could say:“You’re saying, ‘Please don’t bump me!’”If the neighbor girl is crying, I would go over to her and give her a hug, saying “Oh no!Are you alright?That was too rough, wasn’t it?I think he was trying to say, ‘Please don’t bump me!’”Being a Translator for your little guy can help smooth out this time, and when those words come, he’ll know how to say what he’s wanting to express.
And last thoughts: this time when they’re learning to moderate their impulses can be trying for everyone, so don’t forget to enjoy one another as much as you can! Whenever you are stepping up the ‘discipline,’ it’s important to step up displays of love by an equal amount.
Warmly,
Faith