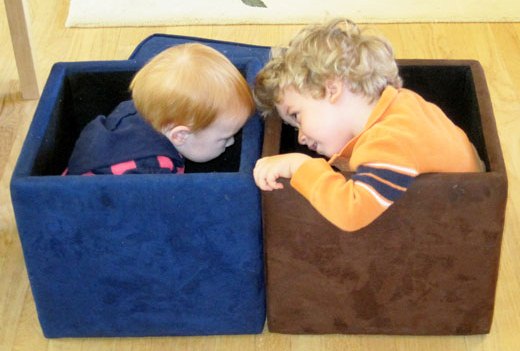 I have a 2 ½ year old an 18 month old, and both are biting. We’re doing as much as we can to prevent them from biting in the first place, but my question is about what do to once a bite has happened. In general, when one bites another, we say “no biting. look you really hurt her/him” in a stern way as we comfort the child who was hurt. is this a good approach? it doesn’t change things but hopefully in the long run it will sink in someday. thank you again. your advice is so appreciated. Be well, MM

Contrary to many folks out there, I’m not a big fan of ‘talking about it’ with very young children. Young children live completely in the moment. They need an immediate response (on an emotional level, not an intellectual one), and then move on. Talking about it just isn’t effective, as you mentioned. Even with a two and a half or three year old, a habit is a habit, and explaining why it’s a good idea isn’t actually helpful. In general when I have a biter who bites, I rush over, give the perpetrator a stern look in the eye and one very firm “No!”, then I pick up the hurt child and I turn my back on the biter as I comfort the victim. This way I’ve responded to what they’ve done, but I’m not giving them a lot of attention for it. After a minute or two, when everyone has calmed down a little, I will turn around and re-establish rapport with the perpetrator, saying, “We only touch each other! That’s all! Show me how you can touch your brother.” I don’t talk about the biting at all. Talking about biting only makes kids think about biting; it never makes them think about not biting.