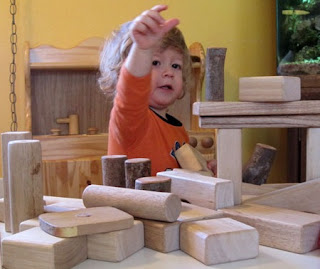 Usually we think of transitions as something that must be done in order to get to something else, but very young children don’t think this way and can’t think this way. Young children live in the moment. So in order to have transitions go smoothly and enjoyably, change your view so that each transition is an activity in its own right, with a beginning, a middle and an end. Think of it as a structured activity like circle-time. It doesn’t happen in a ring, but it’s a series of actions to be done together, with song and verse. It should be just as structured and just as enjoyable for the kids.
Here are the steps that I use to make a transition go smoothly:
1. Get everything you need ready before you start, so that children can be in motion the entire time (no waiting). So this means, get handwashing stuff ready before you start tidying up to come to a meal. In fact, we get our end-of-meal handwashing ready before we even start cleaning up from free-play, so that it’s a smooth transition from play to eating to cleaning up from a meal. Think ahead!
2. Use songs during transitions. This makes a HUGE difference! Songs are really useful because they let a child know what’s coming, without all the talking. You don’t have to be a great singer for these, just use songs you remember from your childhood, or take the tunes of songs you know and add simple words. To the tune of “Twinkle twinkle little star” you could sing, “Find your shoes and put them on, find your shoes and put them on.” You may use several songs, one for the start of the transition, and one for the end. It’s useful to use the same song each time for the same task, so that kids really get the hang of what happens when a certain song is sung.
3. Give individual tasks. Giving tasks that children can accomplish is important. First of all it keeps children engaged in what’s going on. For instance, giving them something to carry out to the car when you’re going somewhere makes it much more likely that they’ll walk straight to the car, instead of getting distracted on the way. But even more important, it allows the child to contribute to the process. It goes more smoothly because he’s helping you. You’re doing it together.
4. Keep things moving. Start the process with some sort of fun thing that gets your child moving (a little game, or putting something in its place), then keep them moving smoothly then entire time. So, start with tidying up, but then move seamlessly into getting ready to go outside. Don’t stop and talk about it, just do it. Children will be swept up in the movement of it and will most likely follow your lead. Children do best when they’re in motion, so think of the entire transition process as a dance where you walz from one thing to the next. If you do things in this way, once you get a child to stop his play, you can tidy up, get a fresh diaper, change the laundry, and get out the door. If you have each step prepared, involve him in each step (give him individual tasks), use song and verse, and keep things moving, it will probably go well. Better than breaking him away from his play four separate times, by far!