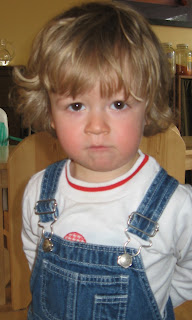 Dear Miss Faith,
My little guy is starting daycare and while I’m sure that it will be a wonderful, loving place for him, I am dreading dropping him off and saying goodbye. We have had a hard time with babysitters lately. Do you have any advice for helping it go smoothly?
Dear Mama,
Yes! I have helped many families adjust to saying goodbye for the first time, and what I’ve seen is this: the thing that makes the most difference for a child is the parent’s attitude. When a parent feels bad that a child is crying, and lingers as a result, children often continue crying for a long time, even after the parent has managed to drag herself away. I think that when a parent does this, the message she is sending is, “I don’t want to leave you here, but I have to.” The way the child interprets this is, “Mom doesn’t want to leave me here; I AM NOT SAFE HERE.”
The biggest gift you can give your child is to say, with every ounce of your being, “I am leaving you in the best of hands.” You don’t have to say this out loud; transmit it through your actions, through your attitude. This doesn’t mean that you don’t acknowledge his feelings: it’s hard to watch you leave! You can be compassionate without feeling guilty for causing the grief. “I know that saying goodbye is hard, AND I know that you’ll have a good time while I’m gone. I love you so much, and I am leaving you in the best of hands.”
But what if I AM feeling guilty? It is heart-wrenching to walk away when my little one is crying his heart out and reaching out to me.
It seems like one more hug could only help, right? But no. Remember, you know that this is going to be a wonderful, loving place for him. You told me that in your letter. That’s why you chose this place. So, if that is true, then being there won’t be a hardship for him; it’s only the process of watching you leave that is hard. In that case, the longer you draw out the process of leaving, the longer you’re drawing out his feelings of unhappiness. Be loving, and firm in your knowledge that this is the best choice for your family, and say goodbye. If you go out to your car and cry, that’s OK. This is a big transition for both of you. But don’t let those guilty feelings make your son’s separation even harder than it needs to be. (One thing that can help is to ask your caretaker to call you if he hasn’t stopped crying after a certain amount of time.)
I tried doing what you said, but he runs after me and latches onto my legs, so the caretaker has to pull him off of me. That feels terrible!
I bet that feels terrible for everyone! It sounds like your little guy may feel safer with a ‘hand-off.’ Hold him while you’re coming in, and when it’s time to go, put him into the arms of his caretaker. Then blow a kiss and wave goodbye. It’s important that you’re handing him over to the caretaker, so that she doesn’t have to be in the position of pulling him away from you. Remember, you want to be giving your son the message that you are making a good decision and he will be safe here.
On the first day, drop-off was OK, but it seems like it’s getting worse and worse.
My experience is that the first day is often deceptively easy, because your child doesn’t know what’s in store! Then days two, three and four get worse and worse, as he starts to realize that this is a regular thing! But by day five he has started to bond with his caretaker, so it’s a little better, and day six is a little better still. Once that bond is established there may still be some crying, but he should be easily comforted by his caretaker after you leave. If your child is only going two days a week, this process might be a little bit slower, as it will take him more time to bond with someone he is not seeing as frequently.
So, know that learning to say goodbye is a process, and don’t lose faith! Continue letting him know that you are leaving him in the best of hands, and don’t draw out the process of saying goodbye. If your child is still really having a hard time after this period, make some time (not at drop-off!) to talk to your caretaker. How long does he cry after you leave? Is he bonding with her and with any of the other children? If he’s not bonding well, it may be that being in a big group is overwhelming for him still, and he’d do better with a sitter or a nanny at home. Many children are not ready to be in a group setting without mom until they are at least three years old. If it seems that he IS bonding with her, ask if there’s anything you could be doing differently, that would help his transition. She may well have some ideas.
Warmly,
Miss Faith