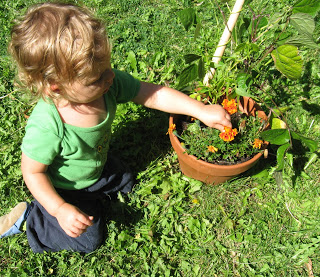 How and Why to Stop Saying “Stop,” “Don’t,” and “No.”
Stop saying “Stop.”
Why I avoid saying ‘stop’:
Young children can’t stop. They don’t understand it yet; the only time they stop is when they’re sleeping. So I try to avoid saying “stop,” as that only tends to lead to frustration, both on my part and the children’s.
So what to do when children are doing something that you don’t like? Well, even though children can’t stop, they CAN do something else. So instead of saying, “stop banging your spoon on the table,” I say, “You can use your spoon to take a bite.” Instead of saying, “Stop throwing sand,” I say, “You can put that sand into a bucket.” Instead of saying, “Stop grabbing,” I say, “You can find a toy that nobody is using.”
When a child is interacting with another child in a way that they don’t like, I try not to say “stop.” Instead, I give them the words to talk to one another:
Sam comes up and tries to grab Harry’s toy.
Harry: Wah! (Looking at me)
Me: Harry, you can say, “I’m playing with this right now.”
Harry: I’m playing with this right now.
Sam: Wah!
Me: Oh, you wish you were playing with that?
Sam: (nod)
Me: Why don’t you say, “Can I use that when you’re done?”
Sam: Can I use that when you’re done?
Harry: Mine!
Me: Harry, you can say, “You can use this when I’m all done.”
When kids say “stop” to each other, I help them by translating very clearly what “stop” means. At Rainbow Bridge, “Stop means take your hands away.” I keep my ears out and whenever I hear a child saying “stop,” I turn around and watch, and remind them if needed, “Stop means take your hands away.” If they don’t, I’ll continue, “It looks like you need some help taking your hands away this time.”
Don’t say “Don’t.”
Why I avoid using the word don’t:
We all think with imagery, and children even more than adults. If I say, “Don’t run in the street,” what’s the image that comes into your head? Now, how about if I say, “Please walk straight along the sidewalk.” The word “don’t” is a modifier that is very weak compared to the strong image created by the rest of the phrase. This is why, if you say “Don’t jump in the puddle,” the average two-year-old will go directly to the puddle and jump in it, and be slightly puzzled as to why you’re annoyed.
What I do instead
The solution is exactly the same as with “stop.” Instead of saying what you don’t want, say what you DO want the child to do. If a little boy is riding his bike towards his friends and knocks into them over and over again, I will say, “You can go around your friends.” If a child is leaning on a gate that is rickety, I’ll tell them, “Please stand up straight and tall.”
Because we think so strongly in images, I also use images to set the scene for children, telling them how I want them to act in an upcoming situation: “When I open the gate, everyone will walk calmly through, and wait on the other side until I latch it again. Then we’ll walk together on the sidewalk, stopping at each tree for me to catch up.” I don’t necessarily expect them to remember and obey, I’m just planting the seeds and setting the scene. Then I’ll remind them right before each step, what’s about to happen.
Why Not to say “No.”
Why I avoid saying ‘no.’
I try to avoid saying no because children hear it all the time, and it loses its effectiveness if used too much.
What I do instead
If a child needs a swift word to stop them from doing something, I will often clap twice, very loudly. This startles them and pauses them long enough for me to let them know what I DO want them to be doing.
If a child asks if they can do something or have something, I try to say Yes, with as many caveats as I need. If I’m up to the elbows in sudsy dishwater and a child asks me to tie a cape around their neck, I’ll say, “Yes. I’ll help you as soon as I’m done with the dishes.” If the child complains that they want it right now, we might brainstorm together: they could ask a friend for help, or try to do it themselves, or play with something else until I’m done.
If the child asks for something and the answer will always be no, I will either tell them what they CAN have, “You can have a red ball today,” and just be compassionate if that’s a disappointment; or I will say “yes” in my imagination: “If I had another green ball, I would give it to you for sure!” I often take this imagination and run with it, making it bigger and bigger, and then transforming it into another conversation: “In fact, if I had two green balls, I’d have one for you and one for me. And we could throw them back and forth. If we had three green balls, who would you give the third one to? What if we had a whole room full of balls? We could take them to the park and give one to every child we met! That would sure be fun. Remember last time we went to the park?” And on from there.
-Tell them when they CAN have/do what they want
Conclusion
The reason that I try to avoid saying stop, don’t, and no, isn’t because it will ruin a child’s self-esteem. I do it because it’s significantly more effective than the alternatives. And I do it because I enjoy my time with toddlers more when I’m not saying no all the time!