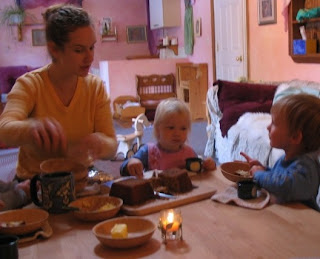 Welcome back and congratulations! I have a question for you – my son is 15 mo old and is the messiest eater you can imagine. For the most part I let him feed himself (he loves it) but eventually he starts throwing food all over the place. At that point I assume he is full and ready to get down and play, but often he’ll keep eating. I don’t want to take the food away if he is still hungry, but I’m also losing my patience with the food flinging. It’s great that we have a dog who cleans up most of the mess – but still… 🙂 Any advice?

Hi Renee,
I am a big fan of letting kids eat by themselves as much as possible, but I’m right there with you that you don’t want food being thrown around. One thing I’ve discovered that works really well is to give a child a very small amount of food, and then give them more when they’ve eaten it all, and more when they’re done with that. I’m not exactly sure why it works, but kids tend to throw food less when there’s less of it. It’s more energy-intensive for you, but it’s worth it to minimize the flinging. He’s a little young to be talking, but when you see his empty bowl you can say, “You’ve eaten it all! Would you like some more?” He can nod, for sure. You see him nodding and you say for him, “Yes, please.” Then, as he gets older, he can say “Yes, please,” for himself.
I’ve also noticed that many kids go through meals in a kind of wave-pattern of eating and not eating (hence the throwing of food, then continuing to eat afterwards). Using the method of eating several small servings can let a child naturally go through those waves. Telling little stories, or doing finger-games, or singing little songs can give a child something to do in the ‘down’ parts of the pattern besides throwing food around, if it hits when his bowl isn’t empty yet. Also, do you eat at the same time as he does? Children act strongly through imitation, so if you see him getting restless and you think food-throwing might be about to start, you could say, “I’m so thirsty! I’ll take a sip of water!” Then you pick up your cup and take a drink. Chances are fairly good that he will do that too. “Mmmmm,” you say, making eye contact with him. Later you might say, “Take a bite!” and you take a bite with your fork.
If food-throwing has turned into a fun game which is much more amusing anything else, I do sometimes take a child’s bowl away, but I just do it for a moment. It might go something like this: a child throws some food and I say, “Oh! That food is just for eating! Where is your spoon?” I take a bite with my spoon. “Mmmmm.” He throws the food again. “It looks like you’re done eating. When you’re ready to eat again, you can have your bowl back.” I take the bowl. “Wahhh!” “This food is just for eating. Are you ready to eat?” He nods. I put the bowl back down. “Where’s your spoon?” This actually works pretty well. If he starts throwing again, I’ll say, “You forgot! That food is just for eating. Take a bite!” And I take a bite. Sometimes a reminder is enough to get them back on track, but at 15 months, it might not be. So, the next time, “I’ll take your bowl till you’re ready to eat.” “Wahhh.” This time, I don’t give it back right away. “You wish you had your bowl, but you forgot that food was for eating. You can try again in a moment.” I take a few bites of my food, take a sip of water, then say, “Are you ready to eat again?” He nods, and gets the bowl back. Normally, that’s the end. But if the throwing starts again, I will take the bowl away and he is all done with his meal (otherwise THAT can turn into a game). I don’t do it angrily, I’m matter-of-fact and a little sympathetic. I reassure him that he’ll get another chance to eat at lunchtime, and I create an image of him doing it right the next time. “You’re just learning that food’s only for eating,” I’ll say. “Don’t worry; you’ll get the hang of it.”
Warmly,
Miss Faith