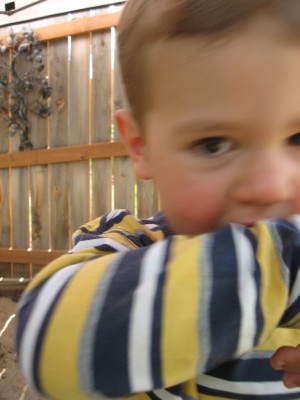 My son is 2.5 and has started using abusive language (swearing). I have tried a lot of things…I have scolded him for this, I have tried to explain very calmly that these are wrong and bad words, but still no progress. He is in a play-group and his teacher has also complained about this. Please help.

Dear Mama,
It can be both frustrating and embarrassing when our young children use inappropriate language.  Sometimes children are simply being imitative, so be sure that you and the other adults in his life are speaking with words that you wouldn’t mind him using.  However, even if it starts as imitation, it often continues because children can feel that “zing” of emotion we get when they do it, and it compels them to repeat the behavior again and again. It may also be the most sure-fire way that your son has found to get attention and interactions from you. Negative interactions with your full attention can feel juicier than neutral or even positive interactions that only have half of your attention.

Negative Attention is Better Than None?

Some people think, “If a child is doing negative behavior to get attention, then I’ll respond by refusing to give him attention.” To me, this feels like saying, “If my child is having a meltdown because he’s over-tired, there’s no way I’m putting him down for a nap! He’ll have to learn to behave nicely if he wants to get sleep!” We see how ridiculous it is to withhold sleep or food to a child who is acting out because they’re tired or hungry, but somehow we don’t make the same association with children needing direct attention from us.

Respond to the Need, THEN the Behavior

So how to we respond to their hidden request for attention without encouraging the behavior that’s bugging us? We can do it by responding first to the need, but then giving them another way to ask for that type of interaction. The trick is that you have to be just as responsive when they ask in the new way, as you were when they did the annoying behavior. Otherwise that annoying behavior will come right back.

Use Humor to Eliminate Swearing

One of the all-time most effective ways I’ve found to stop a toddler from swearing is by using rhymes. Say that a child says, either to me or to another child, “You’re a poopy-head.” (or perhaps their language is even more flavorful; this will still work.) I might respond lightly, “Oh, so silly! That’s not a very friendly name! I’d prefer it if you’d call him a…GLOOPY-head!” I’d pause for a moment and then continue, “Or maybe a…SLOOPY-head!” I make enjoyable eye-contact while I’m saying the rhyme. Usually at this point the child might spontaneously jump in with a rhyme of his own, otherwise I’ll invite him to try: “What else could you call him?” Maybe he suggests, “SNOOPY-head!” I might laugh and say, “Snoopy-head! Did you know that there’s a dog called Snoopy? There’s a cartoon dog, but I knew a real, live dog named Snoopy, too!” At that point the conversation might move on to dogs and dog names, or if the rhyming is feeling extra juicy to the child he might say, “Now he’s a DOGGY-head!” and I’d respond, “A FROGGY-head!” At this point, the conversation has moved completely away from the original unpleasant words.

For some children, my responding to their veiled request for attention without giving them the disapproving “zing” of a reprimand is enough that they don’t swing back to using swear words anymore. They have lots of ways to get my attention, and that one was no more or less effective than any other. In that case, mission accomplished

For other children, however, perhaps they were feeling a bit disconnected from me lately, and my positive attention was just what they were craving. The rhyming game was so fun that they start swearing specifically in order to draw this game out of me. In that case, all I have to do is give them another way of asking for that game. So little Zander runs up to me for the fourth time, playfully shouting, “You’re a poopy-head!” I look back at him. “You want to play the Rhyming Game? OK! Let’s use another word to start. How about… You’re a FRIENDLY-boy!” I’ll wait for his response, and if he’s just looking at me expectantly I’ll get the ball rolling: “Or are you a…CRENDLY-boy? Or maybe a…LENDLY-boy!” And we’re off and running.

P.S. If you’d like six weeks of ideas like this and other parenting support, sign up for the next Tele-Class, Joyful Days with Toddlers & Preschoolers, starting October 19th, 2014.