Something I haven’t talked about much here on the Joyful Toddlers blog is the fact that my daughter (who is four and a half now, as I’m writing this) was diagnosed with Childhood Apraxia of Speech (CAS), also called Verbal Apraxia.  When it was a big deal it felt too scary to talk about in such a public space, and now that it’s largely resolved I mostly don’t think to talk about it.  Just recently, however, we celebrated a major milestone as my daughter graduated from her final therapist (Occupational Therapy)!  In celebrating, I’ve been reflecting on the past three years, and remembering how scary it all was at the beginning.  I couldn’t find much hopeful information on the internet, and it all seemed so bleak.  So I’d like to share our journey and what I’ve learned as a mother in the process. 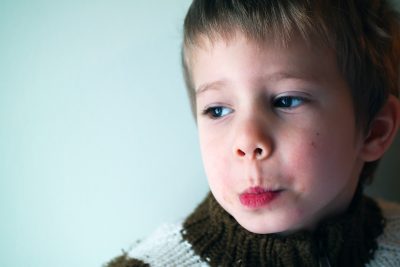 The biggest lesson for me has been one of learning to trust my daughter’s developmental unfolding.  Of course I provide additional support for her as it becomes clear what’s needed, but I don’t need to drown in anxiety over it.  Children are naturally and intrinsically motivated to learn and grow.  She does her best, and her skills unfold on their own timeline.  I can trust in this process, loving and enjoying her all the way.  Just like typically-developing children, she has her strengths and challenges, and we deal with them as they affect our lives.  While this lesson is one (like many) that I have to learn over and over again, that makes it no less true.

Our Journey with Apraxia

At 17 months, my daughter seemed to be developing typically: she had a few words (hat, hot, uh-oh, hush), and had been on the verge of walking independently for quite awhile.  However, she didn’t walk independently until 19 months (officially “late”), and in the process she stopped talking altogether.  I waited but the talking didn’t come back, so I had her evaluated at 21 months.  She tested in the 65th percentile for speech comprehension, which is on the higher side of average, but in the 1st percentile (worse than 99% of children her age) for speech production.  The issue was “suspected motor planning issues.”

I went onto the internet to find out more, and it felt like my world suddenly exploded.  Motor planning issues (the brain telling the muscles to move, and the muscles responding) is the basis of Childhood Apraxia of Speech.  Sites about Apraxia told me that kids with this condition  generally need intensive treatment at least 3-5 times per week (and may need other therapies as well); that kids will not make progress without treatment; and that some children never learn to speak clearly.  Yikes!!

At this point, my brain started doing what all parents’ brains do: it unrolled an imaginary future in which this issue was never resolved.  I started looking for SLPs (Speech Language Pathologists) with experience treating CAS, but I also started watching American Sign Language videos on YouTube, imagining that I was preparing for the future.

What I Wish I Had Known About Apraxia

While we did in fact go through several years of speech therapy, physical therapy, and occupational therapy, we never had more than two therapy sessions total per week.  It always felt manageable.  Progress was very slow at the beginning, but once my daughter figured out that it was WORTH making the effort to make those pesky sounds, she started working really hard at it, and her improvement was exponential after that.  She graduated from speech therapy just before her fourth birthday, and finished occupational therapy (since the motor planning issues weren’t limited to just her mouth) at four and a half.

Of course, one of the scariest things about Apraxia is that you don’t know how long it will take to resolve, or if it even WILL resolve.  At the beginning, progress was really slow (it took almost a year for her just to regain those words that she initially lost).  Here are some things I wish I had known in those early days:

If your child has Apraxia or has recently been labeled with “suspected motor planning” issues, hang in there! I know that my daughter’s experience with Apraxia is different than many other families’ experiences.  I know that many children’s intelligibility issues are not fully resolved by age four (although many children’s are).  Regardless of where your child is at right now, let go of some of your anxiety.  Of course you will do what’s necessary to support them, but allow yourself to trust your child’s developmental journey.  It will be OK.  Regardless of how your child learns to communicate, and at what rate, it will all be OK.  Unpack that knot in your stomach, let your shoulders drop and your jaw unclench.  Take a deep breath.  You’ve got this.